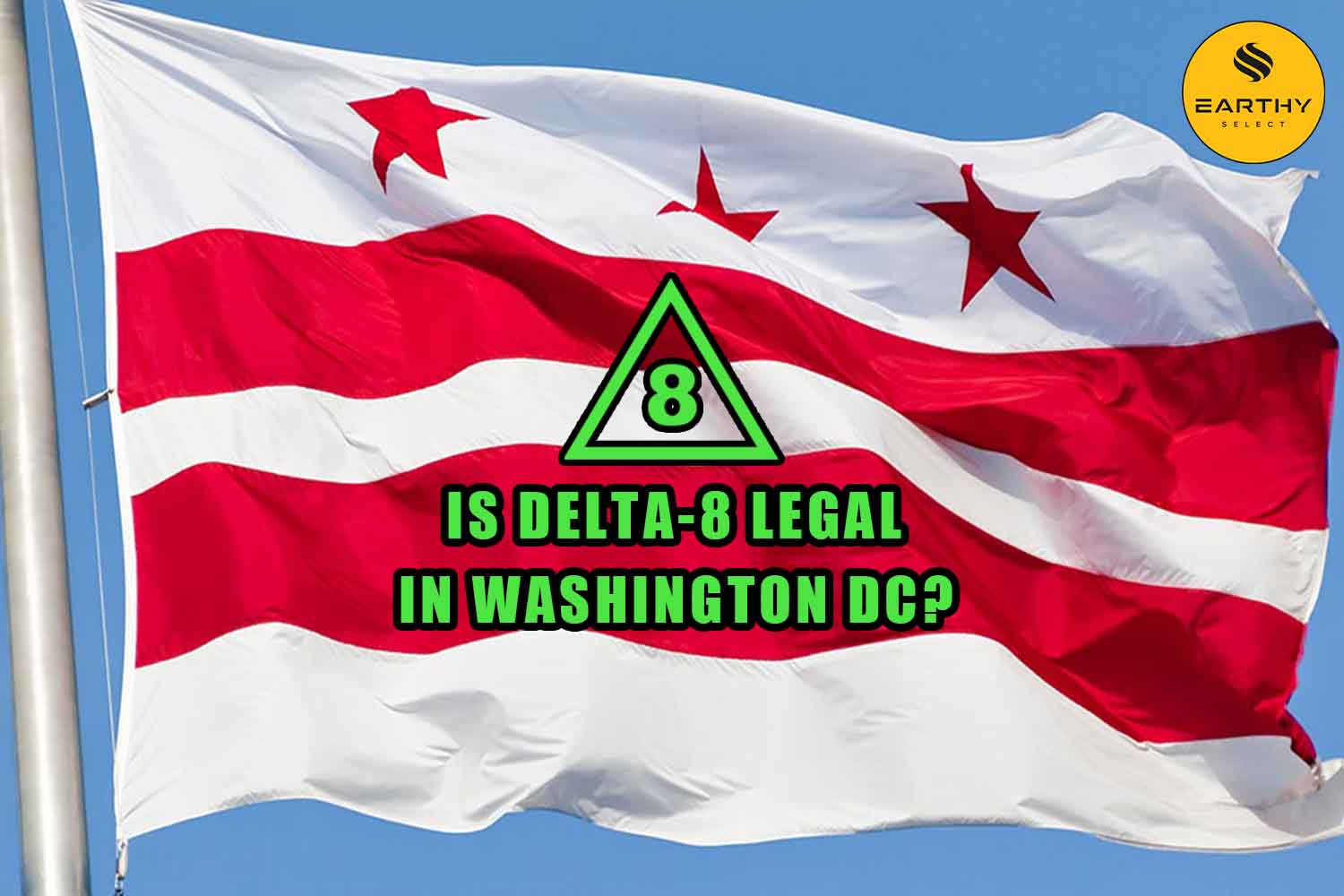 Delta-8 THC is legal in Washington D.C. under the latest Farm Bill. In 2018, this federal legislation was passed by the United States Congress and signed into law by the President. Since then the cannabis industry has been innovating like mad with the class of legal hemp materials that the Bill ushered in. Keep reading for more information about Delta-8 and other hemp derived cannabinoids in the District.

What is Delta-8 THC?

Cannabidiol (CBD) and Delta-9 tetrahydrocannabinol (THC) are probably the two best known cannabinoids. A cannabinoid is simply a substance that comes from the cannabis plant, and there are hundreds!

Delta-8 THC is one of the many other cannabinoids in the cannabis plant, and perhaps the next best known and loved! It is very similar to Delta-9 THC, including the potential to produce psychoactive effects. While Delta-8 THC can produce effects on par with the Delta-9 THC cannabinoid, the well-known psychoactive chemical found in cannabis, Delta-8 is generally not quite as strong.

This is a clear advantage to those who may become overwhelmed when using marijuana. Even in a state like Washington that sanctions adult recreational use of marijuana (see below) it’s helpful to have other options available that only a friendly cannabis policy permits.

When cannabinoids from cannabis (whether from hemp plants or marijuana plants) are consumed, they interact with and have an effect on the human endocannabinoid system (ECS).

The endocannabinoid system (ECS) uses cannabinoids as neuromodulators that work with the cannabinoid receptors throughout the human body. ​​Scientists are still actively studying the ECS, but researchers already think it may help to regulate physiological and cognitive processes, pain-sensation and much more [1].

Even though Washington DC has been able to legalize medical and recreational marijuana, Delta-8 THC products can be a great alternative for those looking to benefit from cannabis without high levels of Delta-9 THC. Delta-8 is a very popular THC product used for therapeutic and personal enjoyment. It is similar to Delta-9 THC which we’ll look at next.

Delta-8 THC, Delta-9 THC, and Delta-10 THC all occur naturally in the cannabis plant, and all three are isomers of the same molecule, tetrahydrocannabinol, or THC. THC is the main substance to cause psychoactive effects in cannabis. Delta-8 and Delta-10 molecules are very similar in structure and can produce similar effects as Delta-9, though typically at a lower intensity.

What does “hemp-derived” mean?

Something that is hemp-derived is made from hemp, sometimes called industrial hemp. Because of its relation to marijuana, and coming from the same plant, it has faced uneven legality in the U.S. and other countries.

The 2014 and 2018 Farm Bills (see next section) established new legal definitions and rules for hemp, including that hemp and “and any part of that plant, including the seeds thereof and all derivatives, extracts, cannabinoids, isomers, acids, salts, and salts of isomers, whether growing or not, with a delta-9 tetrahydrocannabinol concentration of not more than 0.3 percent on a dry weight basis” may be legally used for production, sales, transport, and use.

Hemp and hemp derivatives include many substances like CBD, CBG, CBN, Delta-8 THC, Delta-9 THC, and Delta-10 THC. Any cannabis compound among these, and others, are federally-compliant for use in products.

For many years in the U.S. cannabis was illegal according to federal law whether or not it contained THC, the main psychoactive chemical that occurs naturally in the plant. In the 2010s, the United States Congress enacted two groundbreaking pieces of legislation, called “Agricultural Acts” and commonly known as the Farm Bills.

These Bills recognized that hemp with very low Delta-9 THC concentration is distinct from higher-THC cannabis. In addition to the hemp plant, hemp extracts and hemp products, including THC isomers, are also fully allowed by the Farm Bills.

The 2014 Farm Bill removed hemp from the Drug Enforcement Agency’s (DEA) list of Schedule 1 substances, and this was the seed of hemp’s recent legally produced resurgence. The Bill made hemp federally legal and allowed long-forbidden research into hemp-derived cannabinoids to begin in earnest.

The 2018 Farm Bill expanded on this, allowing people to produce, sell, and consume hemp-derived products, making it clear to legal experts that all other plant materials and substances derived from legally-defined hemp are also federally-compliant [2].

This is despite the fact that many states or territories, like Washington DC, do allow medical use or adult recreational use of cannabis containing much more than .3% Delta-9 THC.

Hemp is not a controlled substance

The Farm Bill, from the federal government, defines hemp as:

Hemp.–The term `hemp’ means the plant Cannabis sativa L. and any part of that plant, including the seeds thereof and all derivatives, extracts, cannabinoids, isomers, acids, salts, and salts of isomers, whether growing or not, with a delta-9 tetrahydrocannabinol concentration of not more than 0.3 percent on a dry weight basis.

Most states passed similar laws in the year or years following the Farm Bill’s enactment. Most of these adopted the same definition of hemp, and legalized hemp derived products. So they are no longer DEA controlled substances at the federal level. It is reassuring to knowingly purchase products that are not forbidden by archaic and racist laws.

For all 50 states, read Is Delta-8 THC Legal in Your State? 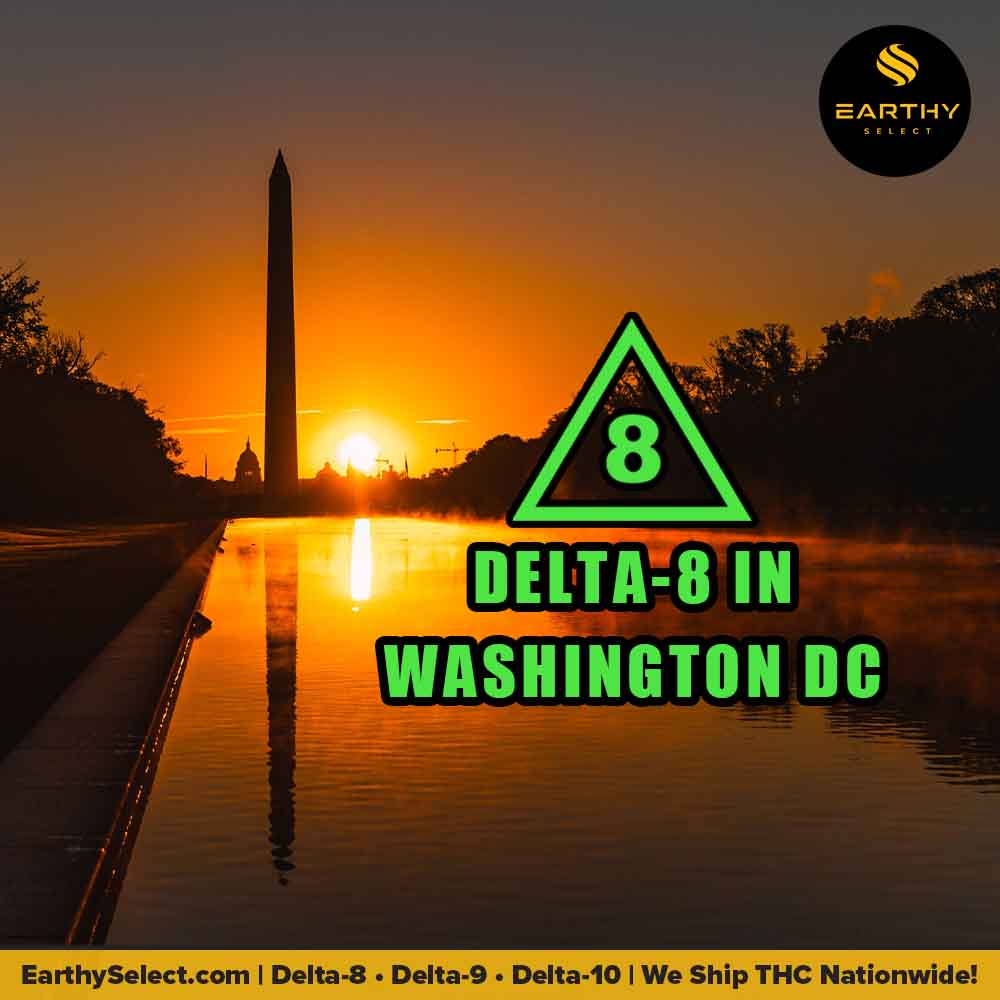 Does Washington D.C. have recreational marijuana?

Yes, in terms of allowing marijuana use for recreational purposes it is one of the legal states, even though it’s technically a district. The Council of the District of Columbia decriminalized possession of cannabis in 2014. And in the same year, the District’s residents passed Initiative 71 as a voter-approved ballot initiative that legalized the recreational use of cannabis. The measure went into effect in 2015 [3].

There are still possession limits. Under the legalization measure, persons over the age of 21 can possess up to two ounces of marijuana, grow up to six marijuana plants (three mature and three immature) in their homes, and gift up to one ounce of marijuana to another person.

Sales of marijuana by licensed retailers are also allowed but no associated regulatory system has yet been implemented [3].

Yes. Initiative 59 was a 1998 voter-approved ballot initiative to legalize medical cannabis. It passed in 1998 but was essentially blocked by delay until 2009 [3].

In May 2010, the Council of the District of Columbia passed a bill legalizing medical marijuana, and medicinal marijuana became legal on January 1, 2011 [3].

The “Legalization of Marijuana for Medical Treatment Amendment Act of 2010 allows DC residents, including minors, to be prescribed, purchase, possess, and use cannabis to treat a diagnosed qualifying medical condition or related side effect [4],” when they are directed by a qualified healthcare practitioner [5].

Hemp-derived Delta-8 THC is legal in Washington D.C. according to the Farm Bill.

The U.S. Congress has jurisdiction over Washington D.C. [6] and its 2018 Farm Bill defined hemp as cannabis with less than .3% Delta-9 THC, and removed it from the federal controlled substance schedule.

The complete definition says hemp includes “any part of that plant, including the seeds thereof and all derivatives, extracts, cannabinoids, isomers, acids, salts, and salts of isomers, whether growing or not, with a Delta-9 tetrahydrocannabinol concentration of not more than 0.3 percent on a dry weight basis.” Since Delta-8 THC is a naturally-occurring isomer in hemp, it is thus also permitted. Note the THC concentration of Delta-8 is not a factor in the Farm Bill definition—only the Delta-9 THC concentration is considered.

You should be able to find Delta-8 in local dispensaries or shops and if not there are definitely online stores stocked with interesting products.

How to buy the best Delta-8

Finding high quality products with Delta-8 THC isn’t complicated. The best way is to buy directly from trusted brands like Earthy Select who follow safe manufacturing standards and use third-party testing to ensure a clean and potent product. If processing of Delta-8 is done poorly, it can lead to degradation, inaccurate potency, or harmful by-products.

The production methods and standards of industrial hemp and Delta-8 THC are critical for its quality, safety and legality. You should always buy from companies who provide a certificate of analysis (COA) for each product. A COA is a document attesting to a product’s laboratory analysis for cannabinoids and in some cases adulterants, heavy metals and pesticides.

Producers should only use third-party lab testing and publish the COA results where buyers can access them. This transparency promotes trust and reliability between producers, wholesalers, retailers and purchasers.

Earthy Select provides the highest quality Delta-8 THC and offers third-party COAs from registered labs for each and every product, including velvety Delta-8 Gummies in a range of potencies!

Final thoughts on is Delta-8 THC legal in Washington, DC?

As the nation’s capital, Washington D.C. is an apt example of the country’s properly changing stance on cannabis. A more progressive—and better-educated on cannabis—populace is slowly gaining ground. Until marijuana is fully accepted and we don’t have to worry about its legal status, you may want to try hemp derived cannabinoids like Delta-8, Delta-9, and Delta-10. Do your own research, and order online.

Disclaimer – Information is provided for educational purposes. It does not, and is not intended to, constitute legal advice or medical advice. We attempt to be accurate and up to date but the legality of cannabinoids and the science of cannabis is evolving. The author is neither a lawyer or a legal expert, nor a doctor or medical expert. You should check with your local authorities and medical providers before buying or using any products.

What does “hemp-derived” mean?

Hemp-derived means made from or extracted from hemp, sometimes called industrial hemp.

What is an isomer?

An isomer is each of two or more compounds with the same formula but a different arrangement of atoms in the molecule and with different properties.

Does Delta-8 get you high?

People may feel high after using THC products. Products with THC, even trace amounts, have the potential to produce psychoactive and therapeutic effects. The strength of the effects and benefits on a particular person will be different depending on a few things: dosage level, body weight, food or other substances in the system, and experience/tolerance level of THC, and personal body chemistry.

Will Delta-8 show up on a drug test?

Yes. It will depend on dosage size and regularity of use, but there is a risk of failing a drug test. Drug tests for marijuana generally identify THC or its metabolites, and Delta-8 THC can make a person fail a drug test. If you anticipate taking a drug test, we suggest checking with your employer or test administrator for clarity prior to taking Delta-8 or any full spectrum products.

Is Delta-8 THC Legal in Washington?

Is Delta-8 Legal in West Virginia?
Scroll to top
Free shipping if you spend over $120.00